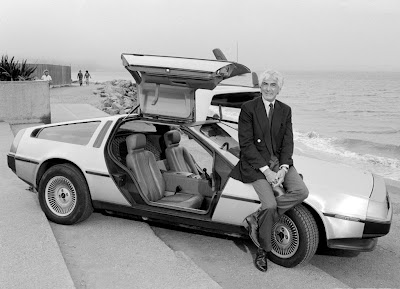 In October 1976, the first prototype DeLorean DMC-12 was completed by William T. Collins chief engineer and designer (formerly chief engineer at Pontiac). Originally, the car's rearmounted power plant was to be a Citroën Wankel rotary engine, but was replaced with a French-designed and produced PRV (Peugeot-Renault-Volvo) fuel injected V-6 because of the poor fuel economy from the rotary engine, an important issue at a time
of world-wide fuel shortages. Collins and DeLorean envisioned a chassis produced from a new and untested manufacturing technology known as Elastic Reservoir Moulding (ERM), which would contribute to the light-weight characteristics of the car while presumably lowering its production costs. This new technology, for which DeLorean had purchased patent rights, would eventually be found to be unsuitable for mass production.

These and other changes to the original concept led to considerable schedule pressures. The entire car was deemed to require almost complete re-engineering, which was turned over to engineer Colin Chapman, founder and owner of Lotus. Chapman replaced most of the unproven material and manufacturing techniques with those currently being employed by Lotus. The Backbone chassis is very similar to the Lotus Esprit. The original Giorgetto Giugiaro body design was left mostly intact, as were the distinctive stainless steel outer skin panels and gull-wing doors.

The DMC-12 would eventually be built in a factory in Dunmurry, Northern Ireland, a neighborhood a few miles from Belfast city centre. Construction on the factory began in October 1978, and although production of the DMC-12 was scheduled to start in 1979, engineering issues and budget overruns delayed production until early 1981. At the time the unemployment rate was high in Northern Ireland and there was no shortage of local residents ready to apply for jobs at the factory. The production personnel were largely inexperienced, but were paid premium wages and supplied with the best equipment available. Most quality issues were solved by 1982 and the cars were sold from dealers with a 12 month, 12,000-mile (19,300 km) warranty and an available five-year, 50,000-mile (80,000 km) service contract.