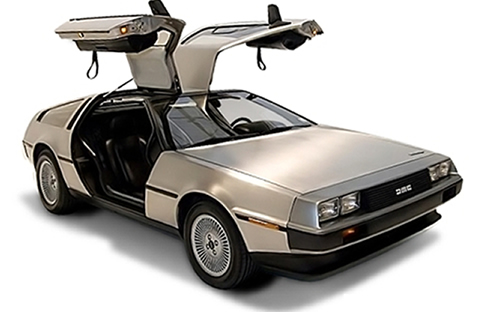 The DeLorean DMC-12 is a two-seater sports car that was manufactured by the DeLorean Motor Company (DMC) for the US market from 1981 to 1982. It featured gull-wing doors with a fiberglass underbody to which non-structural brushed stainless steel panels were affixed. Manufactured in Northern Ireland it is most commonly known simply as the DeLorean, as it was the only model ever produced by the company.

The first prototype appeared in March 1976, and production officially began in 1981 (with the first DMC-12 rolling off the production line on January 21) at the DMC factory in Dunmurry, Northern Ireland. Over nine thousand DMC-12s were made before production stopped in December 1982. Today, about 6,500 DeLorean Motor Cars are believed to still exist. It is perhaps best remembered when it shot to worldwide fame in the Back to the Future movie trilogy starring Michael J Fox and Christopher Lloyd. The car was transformed into a time machine by the eccentric scientist Doctor Emmett L. Brown - the company had ceased to exist before the first movie was ever made in 1985.