This article was posted at wolfsburgrennsport.com by Der Wolfsburg Rennsport 02-21-2011. The site is no longer available on the web so we have reposted here. 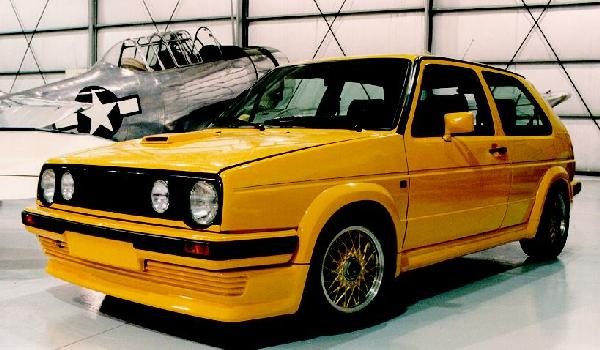 It's a strange thing to meet your idols. Whether metal or flesh, the chance for disappointment is quite high. After all if you're anything like me, you've built your idols into something beyond what everyone or everything else you're familiar with. More capable, more complete, faster, more fun, smarter, able to do everything you can but without even trying. Sometimes though, things really are as good as you imagine. Imagine having a musician who you really like. You enjoy their music, respect it and their ideas, and you feel like if you ever had the chance to hang out, you'd have a lot to talk about, or at least get along well. Well the Zonker turned out to be just that. 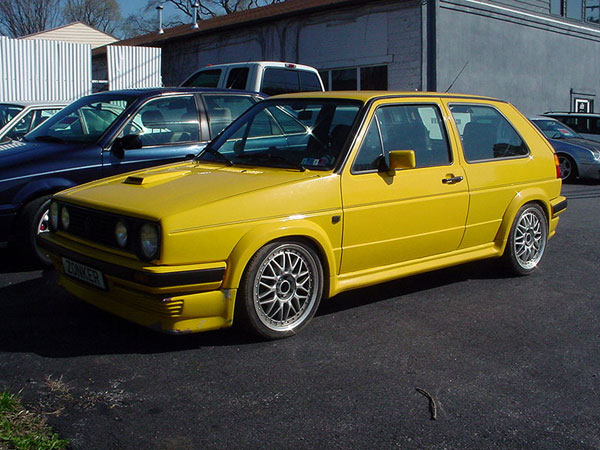 I first became aware of the famous 'Screamin' Yellow Zonker' (named after a popcorn candy which had a bright yellow candy shell) back in the ancient days of the internet. As I've mentioned before, Josh and I had a website / informal club called Charm City VW, and back then there wasn't any chance of having the cash or connections for something exotic like a Rallye Golf. No, we had just one amazing car to lust after, and it was for sale. The Zonker. It made the rounds on all the sites...JWelty, etc, and one could only dream of having a chance behind the wheel, let alone the cash to buy it. Little did I know that 7-8 years later I would have that chance.
But first, a little bit of history. The Zonker was a one-off build by VW Sport USA. VW Sport was essentially the Volkswagen of America version of VW Motorsport. They handled the racing operations for Audi and VW, had a line of products available through dealerships, and generally promoted the brand as a sporting option compared to the rest of the cars out there. VW Sport had some trick parts and trick cars, and the Zonker was perhaps the most trick of all. There is a  very excellent history over on the Euro Parts Inc website, but the Zonker had it all.
First, the shell was prepped by VW Motorsport. As a concept / demo vehicle, many of the parts were straight from the European GTI models and some were very custom. The Zonker had a standard CIS-E 1.8 16v motor mated to a 5-speed Syncro all wheel drive system. Suspension was lowered with higher rated dampers and springs, while the wheels were a 1-piece BBS mesh design. Externally the shell had been sprayed in an eye-popping Ferrari yellow, fitted with a BBS body kit, and had European GTI bumpers, headlights, grill and tail lights. The interior was fitted with beautiful power Recaro seats covered in black leather, with matching rear seats and a KPH instrument cluster. According to legend this car pre-dated the Rallye Golf, which would make sense since it was a 1987 model GTI. 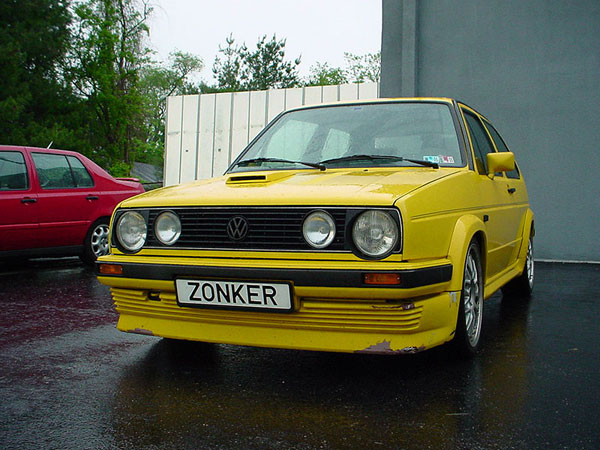 After being constructed and sent to VW Sport in the states, it was sent to Callaway Cars for further development. There it was turbocharged, and that is where the unique (although questionably efficient) intake manifold / intercooler was installed, along with turbo charger and fueling upgrades. The EPI site has a lot of additional detail about the turbo system, including whether or not it even worked as designed for the first leg of the car's journey. This would not be surprising to some extent... 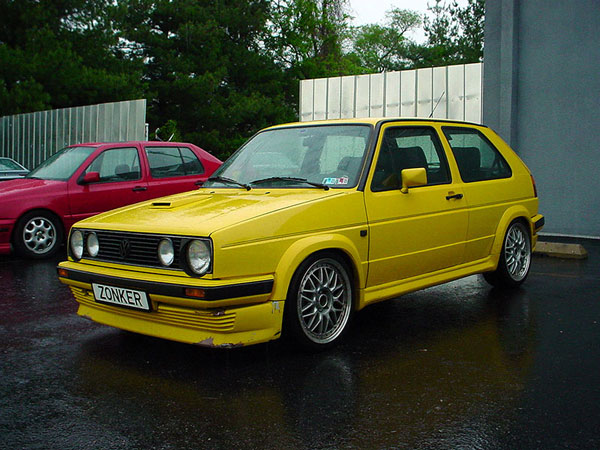 VW Sport, coincidentally, is not the same VW Sport that operated in Virginia in the mid to late 90s. Brad Beardow, of the 1990s VW Sport was friendly with Joe Hoppen of Joe Hoppen Motorsport, who had in the 70s and 80s been head of VW Sport and Audi Sport in the USA. (Porsche too) So with Joe's blessing Brad was VW Sport USA for that time period, despite not being a factory entity. Things changed and at some point Brad changed the name to 1552 Design (now known simply as  ) - so although both companies had the same name, in the 1980s VW Sport was part of VWoA, while in the 1990s it was the VW arm of Joe Hoppen Motorsport, who thanks to his previous position had the okay from the suits to use the name...make sense? Ok, good. 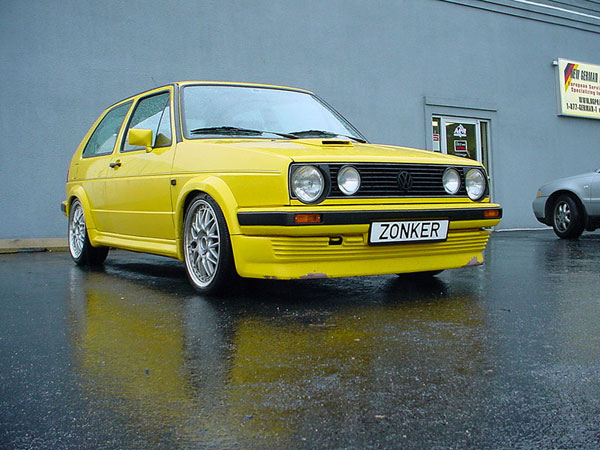 So to continue. The Zonker was sold a time or two, always at very high prices, and it sort of fell off of my radar. I was busy with my new job at NGP Racing, and there were new more powerful and more exciting cars out there that I got to work with on a regular basis. Imagine my surprise when a trailer rolled up one morning in 2004 and began to unload...and the precious cargo it contained was none-other than the one, the only, the Screamin' Yellow Zonker. 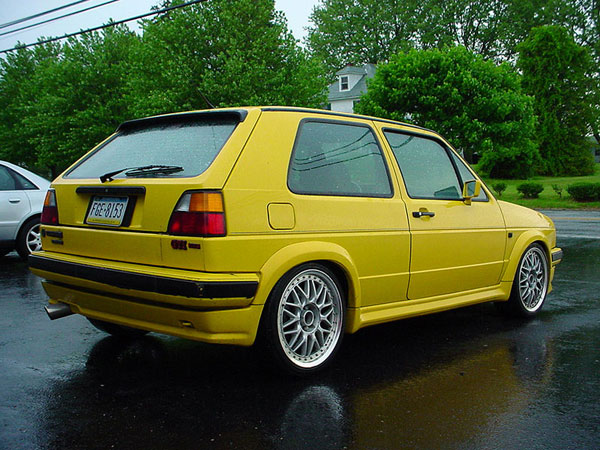 I was floored. Here it was, in the flesh...and in one piece! Well mostly. The car was pretty far from running, and the 15" BBS had long since been replaced with a set of 17" mesh wheels of unknown origin. But it was otherwise complete, and we were going to work on it and get it back on the street. A legend under our roof and under the knife.

Unfortunately the factory CIS-E management, which doesn't exactly love dealing with positive manifold pressure on the best of days, was far beyond repair, and the cost of restoring it to original factory condition would have been too pricey and would have resulted in less-than-good performance. So the decision was made to change over to VW's Digifant engine management system from a G60 Corrado. It was still part of the VW parts bin family so not totally sacrilegious, more or less period correct, and could easily handle the fueling needed for the stock-block 16v. The fact that there are plenty of off-the-shelf turbo software options for the EPROM didn't hurt either. 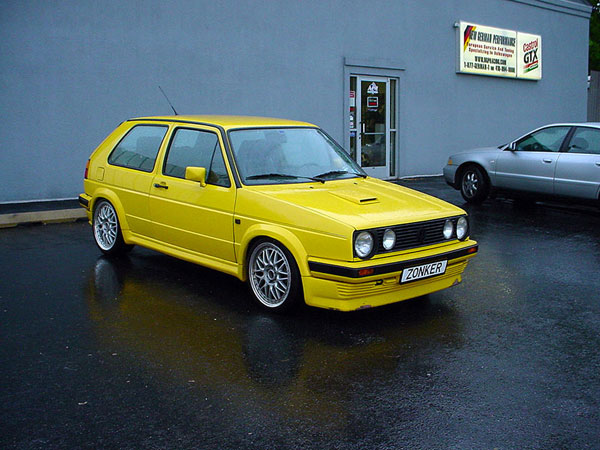 Other than getting things running again, we left the Zonker exactly as it had arrived, which was damn near how it was way back in 1987. With the Syncro system disconnected, the boosted 16v motor made a solid 155 or so wheel horsepower. Not bad, and that was not pushing things at all on the boost gauge...maybe 6lbs or so. When Ronnie took her out for a test spin I just happened to be taking out a then-new R32 for a little drive down the road. It was a unique case of the very first and the very latest in all-wheel-drive performance hatches from VW. Needless to say we couldn't help but test each other out a little bit, and it's notable that the little Mk2 Zonker was able to put just a smidgen of daylight between itself and the big old 3.2 VR6. 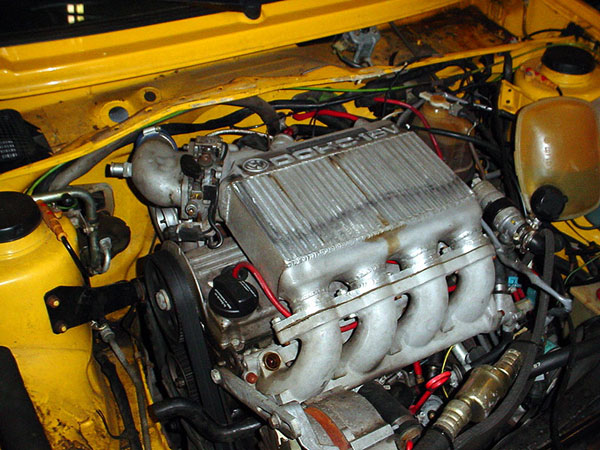 Once the work was completed and it was just about time for customer pick up, I could resist getting behind the wheel, if only for a second. A chance like this was less than likely to present itself, and the simple fact of the matter is that it's good to know just how good the car was running. You never want to turn a car over that you wouldn't be happy to drive home yourself, so in the interest of ah 'double checking,' I approached the bright Ferrari Yellow GTI, opened the door, and entered the cabin. 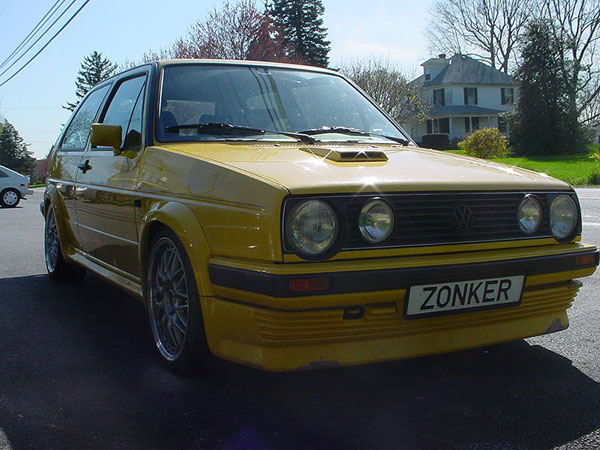 The seats. The leather-clad Recaro buckets, there is nothing better. I've always been a fan of the Recaro Trophy seats, as used in the 87-89 Jetta GLi, but these are even better. Firm but comfortable with adjustable leg support, they position you perfectly for the leather-wrapped steering wheel. All the other controls are more or less as expected. Starting up the Zonker was normal as well. I selected first gear, slowly released clutch, and pulled out from the parking lot.

As I let the vitals come up to temperature, I took particular notice of how the car felt just cruising along. Like all other Syncro Volkswagen models that I have driven, the ride comfort, over bumps especially, is significantly better than the standard semi-independent torsion beams used on the FWD Golf and Jetta. Throttle response was decent, and as the road opened up I put my foot down.

Boost built in a reasonably quick fashion, considering it has a 'real' sized turbo and not a pea-shooter like a K03, and best of all it pulled smoothly all the way up to 7,000rpm. No drama, no hiccups, and not too peaky, the power delivery was the very definition of tractable. It wasn't insanely quick by any standard definition, but had it been released back in 1988, the Zonker would have been a game-changer, and it is chassis that really made the experience. 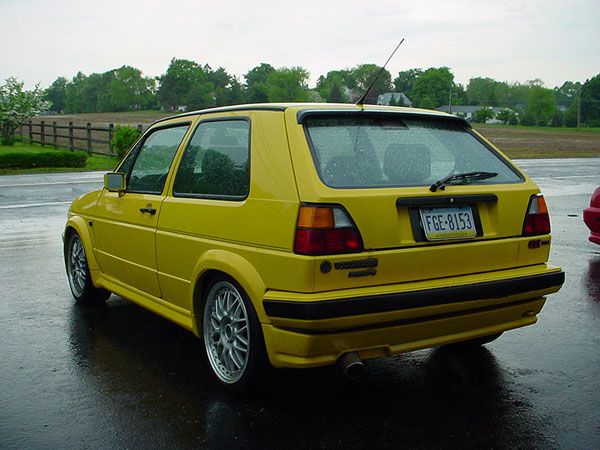 I'm not quite sure what it was, but the Zonker was amazing to drive. It was a fairly soft ride, able to soak up bumps and very 'OEM approved' and all that, but offered complete control. Not that I pushed things too hard, as it would be particularly poor form to wad up a piece of VW history especially when it belonged to someone else, but the Zonker certainly had tenacious grip in all situations.

There was very little that the Zonker could not do well. Had the Zonker been released as a limited-edition, factory performance option or separate higher-end model from the GTI, there is no doubt it would have gone down in history as one of the all-time greats. Having the chance to drive G60 equipped Rallye Golfs from time to time, the Zonker is in my opinion, notably better. It was a touch more nimble and a good deal smoother. The G60 engine is one of my all-time favorites, despite the fact that it is considered a poor unit by many other VW enthusiasts, but the 16v turbo as seen in the Zonker was really that much better. It was more powerful, it was smoother, and had a more natural sort of feel.

Unfortunately the Zonker was a one-and-done, much like the A59 was some years later. One can only wonder what sort of impact it would have had in the market, as well as the sort of ramifications for VW enthusiasts like ourselves...

VW Sport really had their heads on straight back in the mid 1980s, and as we will soon unveil the Zonker is not the only piece of their history to escape into the public hands. The story will soon follow, but the details and car to follow are most certainly worthy of the Zonker fame and notoriety, if not more so on certain levels...watch this space.